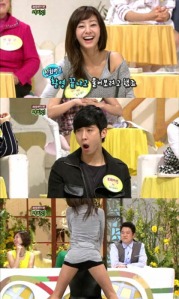 On April 16th, Brian and G.NA guested on MBC’s “Quiz That Changes the World” and amused viewers with their hilarious antics!

As native English speakers, the topic inevitably turned to their fluency, which led the MCs to ask for them to hold an on-the-spot English battle. Like pros, the two playfully bantered over a script that asked them to argue over another man.

Brian assumed the role of a catty woman with ease and immediately K.O.’d G.NA in the battle, with her admitting defeat by stating, “Okay, enough!”

Hilariously, Brian later began hitting on her after being captivated by her performance of Ivy’s sexy “Aha” dance. He began, “This is my first time meeting her, and she’s so talented in everything from singing, visuals, and English. I want to ask for her phone number after the recording.”

Brian, who turns 32 this year, let out a huge sigh of relief and shouted out, “Fortunately!”

Check the battle below! 😀